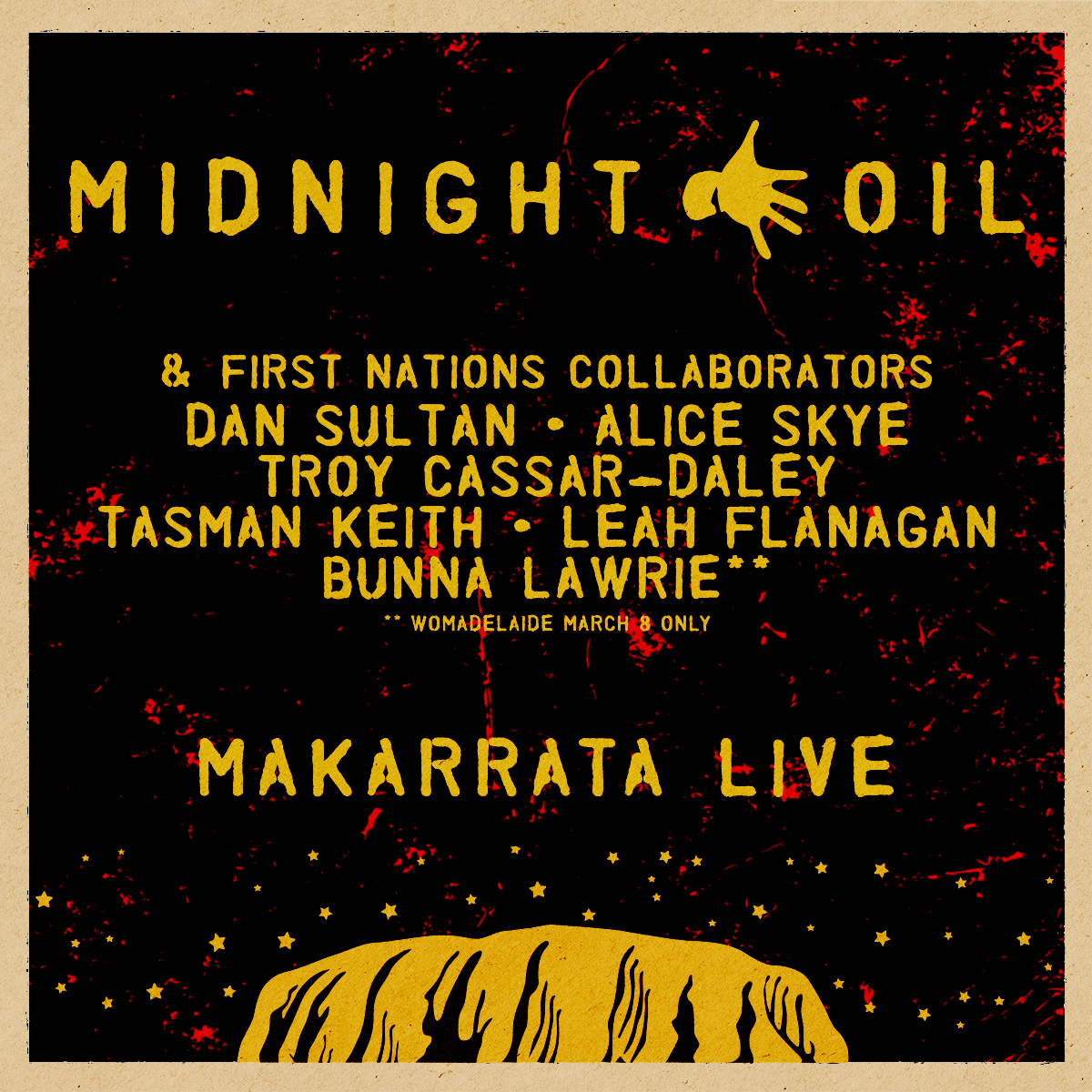 Midnight Oil’s mini-album The Makarrata Project topped the ARIA charts last November. A powerful call for justice and recognition for Aboriginal and Torres Strait Islander people, it featured on most critics’ lists for ‘The Best of 2020’. Next month the band will finally bring that acclaimed new music – plus a slew of other iconic Midnight Oil Reconciliation songs – to Australian concert stages for five special outdoor events.

In addition to appearing as part of the Oil’s set, Dan Sultan, Troy Cassar-Daley, Leah Flanagan and Alice Skye will also perform special guest slots of their own songs on select dates. For more information and all tickets head to www.midnightoil.com/tour.

Sydney bassist Adam Ventoura will also play with Midnight Oil at all these shows due to the sudden passing of longtime band member Bones Hillman late last year. Adam came to the band’s attention when he guested on a recording session at Jim Moginie’s studio involving “Diesel & Dub” creator Declan Kelly. Adam has previously toured with Cold Chisel’s Ian Moss. In addition to appearing at all the Makarrata Live gigs, he will also perform on the Saturday night at WOMADelaide when Midnight Oil will deliver a one-off set of Oils material that does not feature the Makarrata guests.

“It will be a moment heavy with emotion to go onstage without our long time brother in music, but Bonesy always made it clear he wanted these gigs to go ahead without him so we know he will be with us in spirit”, said frontman Peter Garrett. “We’ve just started rehearsing with Adam, who, amazingly, has been living under our noses in Sydney. There’s something primal about his playing that caught our ears that makes the band sound great.”

“We’re fortunate that so many of the collaborators on our mini-album can join us onstage for these shows and we remain hopeful that one or two more of our friends might be able to jump up with us here and there as well”, said drummer Rob Hirst. “The message of these songs feel increasingly relevant as public awareness of The Uluru Statement continues to grow. It’s time for Australia to stop dragging the chain on this issue and we call upon the government to begin the process of constitutional recognition for First Australians and to also heed their call for a Voice to the federal parliament.”

Tickets for Makarrata Live are on sale now for Sirromet Wines, Mount Cotton, Hope Estate, Hunter Valley and Stage 88, Canberra. The current Covid-safe capacity has almost been reached for Mt Duneed Estate, Geelong but organisers remain hopeful a limited number of additional tickets may also become available if Victorian Covid protocols are eased. As always fans are asked to avoid purchasing through reselling sites such as ViaGoGo which typically cost a lot more.

Looking forward to performing on these shows, Dan says “The best thing about doing some shows with Midnight Oil is that I get to see them live so much in such a short space of time. Oils concentrated. Can’t wait.”

Alice Skye is a Wergaia/Wemba Wemba person living and writing music in Naarm (Melbourne). Since her first album ‘Friends with Feelings’ she has signed with Bad Apples, the Indigenous-driven label that celebrates and prioritises black excellence. Alice’s upcoming sophomore album ‘I Feel Better but I Don’t Feel Good’ was produced by local artist Jen Cloher. Her work continues to look inwards and explores finding staunchness in softness.

Troy Cassar-Daley is a proud Gumbaynggirr/Bundjalung man who comes from a long line of storytellers. His songs authentically soundtrack the Australian culture, winning him numerous accolades including 37 Golden Guitars, 4 ARIAs, 2 APRA awards, 9 Deadlys (Australian Indigenous Artist Awards), 4 CMAAs, 2 NIMAs (National Indigenous Music Awards) as well as an induction into the prestigious Australasian Roll Of Renown. The latest addition to his legacy is his upcoming album The World Today (out March 19 through Sony Music).

Hometown pride runs deep for 24-year-old rapper Tasman Keith, whose music is indebted to giving back to the community that raised him. From a small town on New South Wales’ mid-North Coast, Keith is carrying on the Gumbaynggirr storytelling traditions of his family through his eclectic and emotive tracks.

Originating from Darwin, Leah Flanagan grew up in a household filled with music and culture – boasting a proud Italian, Indigenous (Alyawarre) and Irish heritage that she credits as early influences to her sound. Flanagan’s latest album ‘Colour By Number’ is out now through her own Darwin based, Indigenous owned and operated label Small Change Records.

Bunna Lawrie is a member and respected elder of the Mirning Aboriginal tribe from the Coastal Nullabor, South Australia. He is a Mirning whaledreamer and songman, medicine man and storyteller of his tribe. He is Coloured Stone’s founding member and chief songwriter.

These concerts seek to elevate The Uluru Statement From The Heart which calls for a Makarrata – or “truth-telling” – to account for the theft of lands and displacement of First Nations people.

For more information and all tickets head to www.midnightoil.com/tour.