“The Great Circle 2017” World Tour will see the group’s classic line-up literally circle around our overheating planet for 6 months, starting and ending with gigs in Sydney. Appropriately for a band forged in their hometown’s sweat-drenched beer barns, the tour will begin in mid-April with an intimate local pub gig (details to be announced closer to the date). Midnight Oil will then hone their live show with over 30 gigs around the world during the northern summer, playing iconic venues from Sao Paulo’s Espaço das Americas and the Wiltern in L.A. to London’s Hammersmith Apollo and The Olympia in Paris. They will share festival stages with artists like Arcade Fire, Sting and The Pixies and finally return to New Zealand after 20 years.

This long-awaited World Tour will climax with 18 special homecoming concerts through October and November, 2017. Given the band’s deep connections with central Australia the local leg will kick off in Alice Springs and Darwin before starting to circle their homeland with a show in the rainforest near Cairns. Over the following five weeks the tour will loop clockwise around the country in mainly outdoor venues including Hope Estate in the Hunter Valley, Victoria’s Hanging Rock and Melbourne’s Sidney Myer Music Bowl, Brisbane’s Riverstage and the Village Green beside Adelaide Oval before “The Great Circle” finally comes to a close right back where it all began; with a final show in Sydney on November 11 at that traditional home of Australian political activism, The Domain.

These will be Midnight Oil’s only shows in the last 15 years apart from two stadium benefit concerts (and their related small warmup gigs); “Waveaid” at the Sydney Cricket Ground (2005) and “Sound Relief” at the Melbourne Cricket Ground (2009). It will also be the group’s most extensive world tour since their classic late 80’s/early 90’s albums like “Diesel & Dust”, “Blue Sky Mining” and “Earth & Sun & Moon” sold over 10 million copies around the globe.

The diverse spread of Special Guests who have signed up to be part of this unique tour reflect the long shadow that Midnight Oil has cast across the musical landscape. They include significant Australian voices such as John Butler Trio, AB Original, Adalita, Apakatjah, Bad/Dreems, Birds Of Tokyo, David Bridie, Ash Grunwald, Irrunytju Band, Jack River, Jedediah, The Jezebels, The Living End, Abbe May, Something For Kate, Spiderbait, Dan Sultan, Urthboy, and Frank Yamma.

People who sign up to Midnight Oil’s mailing list at www.midnightoil.com/mailing-list in the next few days will get first access to Australian tickets in a special pre-sale on Thursday February 23rd alongside Frontier Touring Members. Remaining tickets will go on sale to the general public on Monday February 27th.

All dates, venues, line-ups and ticket information are listed below (digital version here). Exact on sale times are deliberately being staggered from show to show to reduce website congestion so fans should pay very careful attention to all the details at www.midnightoil.com/tour-dates . Extensive anti-scalping measures are being taken around this tour so fans are formally advised to only buy tickets from the official ticket agencies listed on the band’s website to avoid possible fraud and needless overpayment via so called “reselling” sites.

“The Great Circle 2017” will be promoted in Australia by iconic locally owned rock promoter, Frontier Touring with the support of the band’s record company of nearly 40 years, Sony Music. The national Triple M Network and Foxtel’s MAX will proudly present all dates with some shows also having local presenting radio partners (see info below).  Both Triple M and MAX will unveil exclusive Midnight Oil programming over coming days.

In a unique press conference on Sydney Harbour today this most Australian of bands also announced the impending release of a remastered CD box set called “The Full Tank” featuring all of their existing albums and EP’s plus a mammoth new 4 CD/8 DVD trove called “The Overflow Tank” which will include over 14 hours of previously unreleased and rare material. Both of these box sets will be housed in replica miniature water tanks like the one featured onstage at so many ‘Oils’ gigs. The band also unveiled their first ever complete Vinyl collection which will feature 11 remastered LP’s and two 12” EP’s all cut at Abbey Rd Studios in London. For full boxset track listings and content information visit www.midnightoil.com/store The Boxset Collection is available for pre-order now, out May 5 through Sony Music.

Anyone with even a passing knowledge of Australian culture knows the basics of Midnight Oil’s story. They are the incendiary post-punk band from Sydney’s northern beaches who shunned TV shows like Countdown, instead gigging endlessly and forging a fierce bond with their audience through jagged Ozrock classics like “Back On The Borderline”, “Bus To Bondi” and “Don’t Wanna Be The One”. They are the musical innovators who turned high tech anti-jingoistic polemic into hits like “Power & The Passion”, “U.S. Forces” and “When The Generals Talk”. They are the activists whose social justice campaigning includes “The Dead Heart”, “Redneck Wonderland”, “Beds Are Burning” and hijacking the 2000 Olympic Games Closing Ceremony with their “Sorry” suits. They are the committed humanists and environmentalists who brought us anthems like “Blue Sky Mine”, “Forgotten Years” and “Say Your Prayers” plus a string of protests from the Tasmanian wilderness and the Jabiluka Uranium mine near Kakadu to mid-town Manhattan where they unforgettably stopped traffic outside the Exxon building after the Alaskan oil spill.

Their music makes you feel. Their lyrics make you think. And the combined impact live onstage is nothing less than a call to action.

In a dangerously warming world of Hanson, Trump, Petry and Le Pen the voice of Midnight Oil clearly takes on renewed relevance; they have always been a band that both reflects and shapes “the temper of the times”. So while clarion calls like “it’s better to die on your feet than live on your knees” may have been intended for earlier eras they resonate more than ever in these days of ‘alternative facts’.

In keeping with the band’s longstanding commitments, their carbon footprint during “The Great Circle” World Tour will, of course, be fully offset and sustainability initiatives will be undertaken at all shows. Midnight Oil will also continue their collaborations with local and international environmental organisations including Greenpeace, supporting their campaigns on crucial issues like dangerous climate change and the imminent threats to Australia’s Great Barrier Reef.

At one level “The Great Circle 2017” simply reflects the geographic reality that the tour will loop around the world and then circle Australia. At another level the name clearly implies the planet itself but it has a further meaning too. Sailors, and airmen use “the great circle” to navigate the globe because on a sphere the shortest distance between two points is not usually a straight line. How appropriate for a group who has always been deeply engaged with the world around them but whose career path has never been linear.

Midnight Oil is more than just a rock ‘n’ roll band. In 2017 they will finally bring things back to where they all began. The circle remains unbroken. 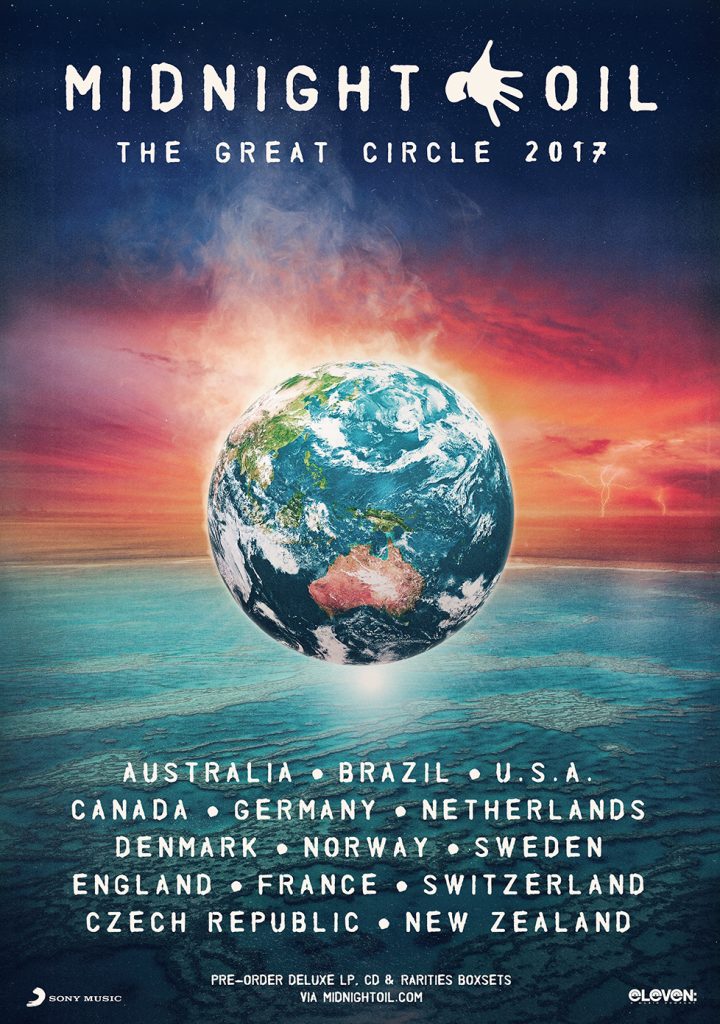