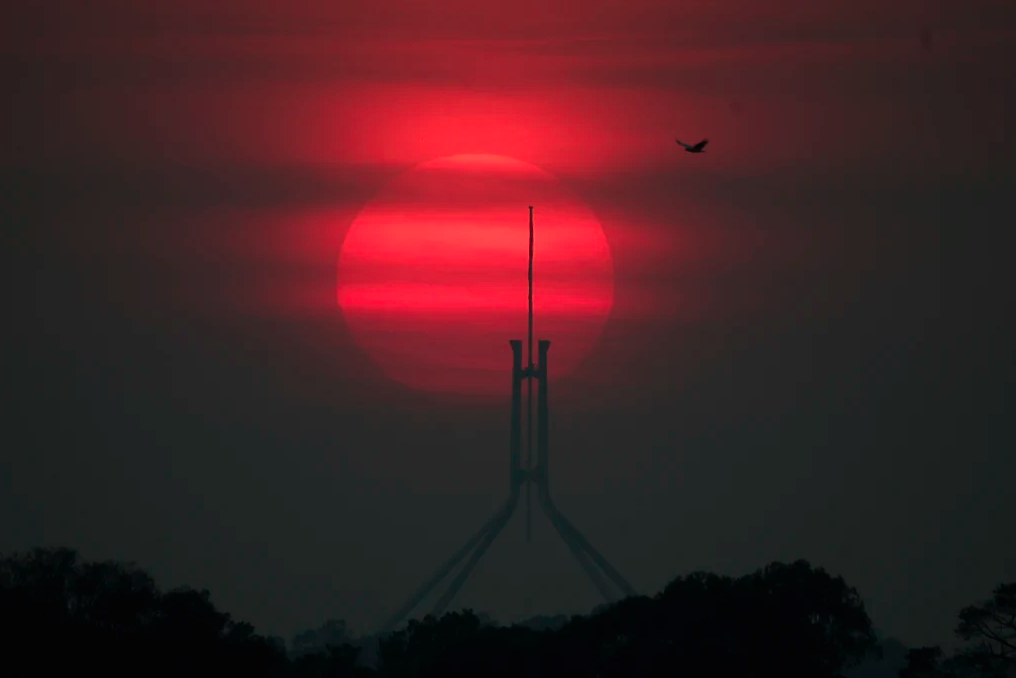 Here’s what we know.

The natural world – our environment – the basis of our existence, is under threat as never before.

We are surrounded by fires, force fed by a super hot spring. Our cities and towns are blanketed with smoke and the sun has gone out, it’s hard to breathe.

Rivers and springs are drying out, big and small towns are running out of water, out of life.

The planet is burning and weather is veering out of control and it’s going to get a whole lot worse, very quickly, unless we act with a sense of urgency, and get ourselves on a zero carbon pathway.

These aren’t disputable facts nor an ideological position, this is our reality. We are facing a climate crisis equivalent to war in terms of the scale of the threat.

Other than for a brief, ‘Eureka’ moment when the Gillard government’s scheme to put a price on carbon kicked in and emissions actually starting coming down, the anti-science, anti-environment stance of a belligerent coalition has derailed the debate, frustrated real action, and cost the country dearly.

The Prime Minister cuddles a lump of coal in Parliament and lies when he says the situation is under control, and that we will reduce greenhouse pollution to the extent necessary. In fact, emissions are slated to rise. And are rising.

There is no economic incentive in place to reduce greenhouse gases spewing into the atmosphere, nor the political will to save the Great Barrier Reef, no plan for how we are going to survive the climate emergency and the environment department has just been dismantled.

So the Labor Environment Action Network – the largest non-factional grouping in Labor – which aims to ensure the environment is central to decision making and policy-making in the party, and when elected, in government, is more important than ever before. Indeed, LEAN is the future of Labor because it is LEAN that is tackling the fundamental new social reality.

Whilst it’s not too late to avert the worst of the climate catastrophe, we are running out of time.

We have just over a decade to act if we want to limit global warming to 1.5 degrees, which means cutting emissions by half by 2030 to have an even chance of surviving in a livable world.

If we act with purpose a great future is possible with Australia a clean energy superpower, nature repaired and revitalized and our cities and towns clean and livable gain.

What does this mean for Labor, and the Labor Environment Action Network?

There must be real ambition. The party must have the wits to realize what’s at stake. Labor was founded in response to a social reality.

Historically Labor represented the ideal that everyone should have a fair go, safe working conditions and decent pay. In the 1980’s Labor’s response to the social reality meant preserving the safety net while modernizing the economy.

Today Labor again needs to be that party. What we used to call ‘the environment’ is now a mainstream threat to the lives and realities of working Australians – indeed all Australians.

We need to move past the false dichotomy debates of jobs versus the environment, to develop national policy that will enable us to rise to the scale of the challenge, in the time required.

Politics has been lagging behind. Too often in Canberra climate and environment are seen as just another issue for argument. But this is a deadly category error because the changes we are seeing are not a matter of opinion or ideology, they are of a different order of magnitude altogether.

Recognizing the decade of failure we’ve experienced and the intensity of the culture wars, Labor must be its best in rising above the short term, building coalitions not descending into tribes, responding to the crisis with real leadership.

Climate is such a big issue that building a national consensus and delivering a nation wide transformation of the economy is the answer to the question about the legitimacy of political parties and the relevance of Labor. This is not business as usual politics. Labor’s future is tied to its capacity to rise to the biggest challenge in its history, arguably the biggest challenge in the nation’s history as well.

Labor must draw on its proud record in protecting the natural environment, and its proud history of bringing the country together to face the conflict of World War Two, remembering the green movement and the Green Party are not necessarily the same thing. Millions of Labor voters are proud and committed environmentalists, because they trust in Labor and in the ideals of social democracy as the best way to unite the country on a challenge of this magnitude in a way that is both fair and effective.

As many Australians worry they no longer live in a cohesive society, whilst at the same time expressing greater concern about climate change, Labor can build a sense of shared purpose, drawing these parts of our tradition together.

Our true believers are dying now. The suburbs of western Sydney and Melbourne are being crucified on the altar of inaction, regional and rural communities are hostage to climate damage, and only a party with an understanding of a just political economy can deliver lasting climate solutions.

Labor must face down self interest and sectional interest, whether from some in business, or some in the CFMEU, or from individual members who eschew reality and are not committed to the challenge, and indeed in the case of the Shadow Minister for Agriculture & Resources Joel Fitzgibbon, deliberately undermine the party whilst still holding their position.

It’s important to realize that we are witnessing a tectonic shift in the world’s climate at the same time as faith in established institutions and the liberal democratic experiment is waning. Only by responding with courage can any political party hope to establish lasting legitimacy in the eyes of the citizen.

This past week saw concern about the environment reemerge as a key issue for Australians. For young Australians it always has been important. They will be more radical and less forgiving then their parent’s generation for it is they who will bear the brunt of the climate crisis if we fail to act now.

This is Labor’s great challenge, and there is no time to waste. Labor’s mission then is not simply to avoid catastrophe, but to build a just, decent country where the world we inhabit is healthy, and the prospects for our children fair.