What I learnt in a revelatory journey into the desert 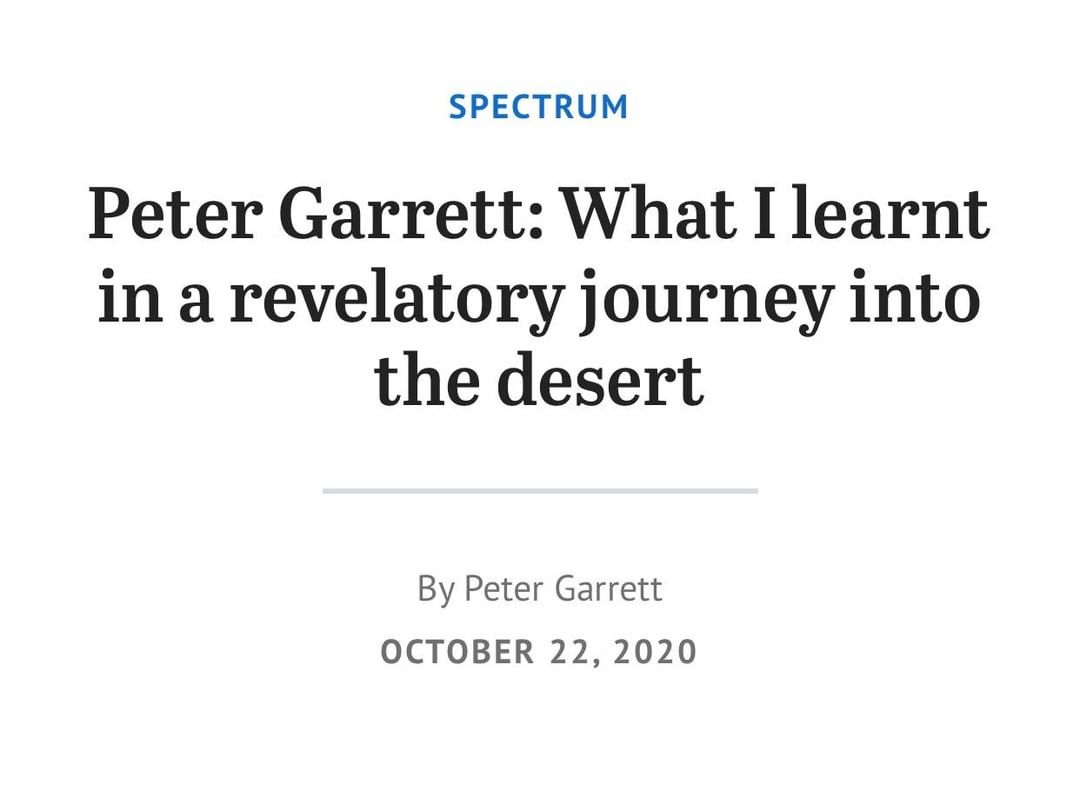 It starts with lullabies, the most elemental of musical offerings. Then nursery rhymes,  hymns sung in church and school choirs, especially carols. One of my favourites was  ‘Out on the plains the brolgas are dancing lifting their wings like warhorses dancing …  and the refrain, apart from kangaroo and billabong, likely the first Aboriginal expression I’d ever heard, ‘Orana (welcome) to Christmas day’.

As I was growing up Ella Fitzgerald, Gershwin and Elvis oozed out of the magisterial,  grey HMV record player sitting in the corner of our living room. Then came sparkling  Brit-pop on the radio with the Beatles, Kinks, Who, and our (sort of) own Bee Gees in full swing. Starting with ‘She Loves You’, ‘You Really Got Me’, ‘Won’t Get Fooled  Again’, ‘New York Mining Disaster’, and it went on from there.

Later I set out to discover the blues, as all aspiring singers are won’t do. Muddy Waters, Howling Wolf, Renee Geyer, Chain. After leaving home and zigzagging through university I tended to bands that reflected the country I knew; Skyhooks, The  Dingoes, and later Cold Chisel and Yothu Yindi, the list eventually, thankfully,  stretching longer than a full forward’s arms.

Finally, I found musicians that pushed hard, when I met a young Rob and Jim already writing songs with bite, then Martin arrived with a guitar and away we went.

It seems like an ancient history ago now but back then we were just trying to figure how to present the gems we were creating (at least to our ears), and, crucially, our political take on things, to an indifferent world.

In these formative years, I knew by heart the hymns and anthems of my schooldays,  including God Save the Queen, minus the Johnny Rotten snarl – all generated from the western canon. The songs that landed in the ears of kids growing up in the 60’s and  70’s – again mostly imports from London or LA – were utterly familiar.

Yet at that time I cannot recall hearing any music of any kind that emanated from  Aboriginal Australia. Put it down to a sheltered middle-class upbringing, and the narrow gate through which any sound travelled to the ears of my generation. The  ‘great Australian silence’ was deafening.

This expression coined in 1968 by anthropologist WEH Stanner, refers to the unacknowledged history of British colonists taking by force a continent already occupied. Aboriginal people were ‘a melancholy footnote’ Stanner said, and this great  Australian silence echoed in the small life of a suburban teenager.

A whispered, widely held sentiment that ‘It was better that the blacks should die, than that they should stain the settlers heath with the blood of his children’, was unfamiliar to me. As for the songs, old or new, of First Nations people, I’d heard nothing.

Fast-forward to 2017 after my decade in formal politics whilst the rest of the band played on we’ve come together to find out if being on stage still works for us – it does. Then to see if our audience is still around too – they are. Lucky days.

There’ll be no shortage of new songs if we decide to have a go at making a new album but whether they join the ranks of the hundreds already recorded is an open question.  Few bands successfully reunite other than as nostalgia acts, and fewer still produce anything that isn’t a pale imitation of earlier work.

Hence the Makarrata Project, drawing on long time connections with Aboriginal people, collaborating with Indigenous artists, and featuring the Uluru Statement from the Heart, which called for a constitutional recognition for First Nations people, a  Voice to Parliament, and a coming together – a Makarrata – to unite.

In 1986 we’d gone out with the Warumpi Band from Papunya on the aptly named  Black Fella/White Fella tour, playing to towns and small settlements through remote and northern Australia.

Our immersion in Indigenous culture and non-Europeanized landscapes was brief but revelatory. We discovered what was rarely mentioned at school or university, namely,  a vibrant and pervasive culture still extant within the fledgling modern nation we’d grown up in.

If we’d bothered to look we would have encountered Aboriginal people in any town or city, albeit hidden from view. Still the absence of much of the ephemera of city life provided space to think about what had actually happened in the past, and what lay ahead. We were changed forever.

As for music, there was plenty. At the apex were the ceremonial songs and dances that marked important occasions. The hypnotic rhythms of chanted songs,  with clapsticks, and sometimes didge, that is increasingly familiar today.

In many settlements there was all kinds of western-influenced stuff: rock, reggae, surf instrumentals, often played on makeshift instruments and run-down equipment as if people’s lives depended on it. Incidentally, nowadays this activity is a given.

In some larger towns country music had preceded us. Slim Dusty, who with his wife  Joy Mc Kean spent a lifetime on the road, was a name to reckon with. Battered acoustic guitars were pressed into service to entertain neighbours with the maudlin twang of country classics and originals.

Here was a pub band from Sydney, too loud and too fast for the world we’d entered,  performing to some of the so-called “poorest people” in the world according to  Encyclopedia Britannica, with the shock of white invasion still reverberating across the red dirt.

Yet we were made welcome, and the sharing of significant law objects by the Pintupi people in the Western desert- a remarkable gesture for its time – was a turning point.

The Warumpis had already toured some of these parts. The legal fiction of Terra  Nullius that at that time had sanctioned white settlement because Australia was ‘a land belonging to no-one’ was a joke. Every corner of the country and all that lay between was brimming with people who’d been living there forever – the First Australians –  and there was music.

Towards the end of the tour at Numbulwar, a small town on the coast in Eastern  Arnhem Land, I lay outside in the night air to listen as the Warumpis loped through a  song called My Island Home, written by guitarist Neil Murray and singer George  Rrurrambu. The song is a bittersweet yearning of a man wanting to return to his birthplace, Christine Anu later successfully covered the track.

As the music spilled out over an audience of a couple of hundred people sitting under trees outside the public school I was struck, as I have been many times since when listening to First Nations’ artists, by how real the sentiment is, as against much western popular music with its fleeting conceits and extreme narcissism.

Like My Island Home, many of the songs by Aboriginal artists at that time, and since, fix on country and family, the tragic losses and deep longings.

But politics is never far from the surface. The lyrics spelt it out. In Warumpi’s From the Bush, No Fixed  Address Bunna Laurie in Coloured Stone … white man’s burden.

Over time we became aware that white Australia did indeed have a black history. It’s incredible that for many years Aboriginal men were excluded from voting whilst being accepted into the army to go and fight for king and country, and that is just one example of many.

The call of Aboriginal and Torres Strait Islander peoples seeking justice for the theft of their lands and waters, their wages, and tragically in many instances, their children,  was growing ever louder.

Fair-minded Aussies were supportive, and a movement for reconciliation emerged, to be embraced half-heartedly by governments. Mining and pastoral interests and sections of the conservative establishment blocked and frustrated change.

The High Court eventually put Terra Nullius to bed, but the abridged form of land ownership called native title that emerged was far from satisfactory.

A Royal Commissions into Aboriginal Deaths in Custody in 1986 saw many recommendations ignored. Since then over 400 more deaths have stilled the air.

In the national arena, Bob Hawke promised a treaty in 1988 – nothing. Both sides of politics promised to address the significant social disadvantage suffered by  Indigenous Australians-little progress.

During his tenure, John Howard refused to offer a formal apology. Kevin Rudd repaired that omission decades later but no government has managed to seriously to close the gap. Tony Abbot cut half a billion dollars from the budget and abolished the department of Indigenous Affairs, whilst saying ‘lifestyle choices’ of Aboriginal people shouldn’t be subsidized, and then received the highest Queens’s birthday honour for ‘services ‘to the Indigenous community, and Malcolm Turnbull refused to countenance a voice to parliament for Aboriginal people on the grounds that it would constitute a third chamber in the parliament – it wasn’t anything of the kind.

In 2016 Adam Goodes was booed out of the sport he excelled at by braying racist crowds, whilst the AFL and many in the media turned a blind eye.

Last month one of the world’s largest mining companies chose to destroy rock paintings that had been on the walls of Pilbara caves before the Egyptians built the pyramids.

Is it any wonder a Black Lives Matter movement has surged with younger Australians out on the streets?